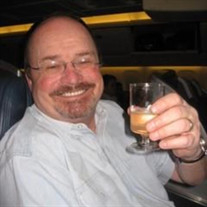 McGUE, STEPHEN CRAIG, age 74, of Sarasota, Florida, passed away on February 14, 2022, at Sarasota Memorial Hospital, from complications related to bladder and prostate cancer. Known as “Big Steve” to his family and those close to him, his long-time friends simply called him Magoo. Steve was born in Columbus, Ohio but spent his formative years in Huntington, Indiana, where he attended Huntington High School. He was appointed to the US Military Academy at West Point, NY. Upon graduating in 1969 with a degree in engineering, Steve branched Infantry. He was an Army Ranger, and as an officer in the Special Forces, he served tours of duty in Germany and Viet Nam. After he left the Army as a Major in 1976, Steve attended the University of Pennsylvania, Wharton School of Business. He joined the FMC Corporation in Chicago, and then was later hired by Hart Schaffner & Marx Corporation (HMX) where he met the love of his life, Julie Ryan McGue. Steve rose in the ranks at HMX and became President of Jaymar Ruby Corporation in Michigan City, Indiana. During this time, Steve developed his two favorite hobbies: golf and flying airplanes. When Steve left Jaymar Ruby to work for Payless Shoes in Topeka, Kansas, he headed up an international division, expatriating his young family to Cuernavaca, Mexico. After the international stint, Steve moved his family to Hinsdale, Illinois where they lived for 24 years. There, Steve formed Shamrock Corp. and fulfilled his entrepreneurial dreams by purchasing two KFCs and opening several Brueggers Bagel Bakeries. He grew Shamrock Corp. into a successful multi-unit Taco Bell/KFC franchise. Besides his fierce commitment to family, Steve had strong ties to the communities in which he lived and worked. He supported many charities financially and with time and talent: the United Way in Michigan City, Pillars, Benet Academy High School, Catholic Charities, and Notre Dame and Cornell Universities. Steve was at his happiest when he was flying his Cirrus to golf weekends, over the family farms in Iowa and Indiana, to Army football games and Cornell basketball games, and to the family ski retreat in Big Sky, Montana. His deep smile, wit, intelligence, and candor will be sorely missed. Steve McGue is survived by his wife of 37 years, Julie Ryan McGue, their four children: Colleen McGue (Sean Sellers), Molly McGue (Jonathan Lumley-Sapanski), Daniel (fiance Phoebe Tzannes), Kassie, and four grandsons; his sister, Christie McGue (Bob Calt), and brother, Mike McGue (Corinne), as well as numerous loving in-laws, nieces, nephews, and a host of long-time friends. There are two memorial services planned. A Celebration of Life on Saturday, Feb. 19, 2022 at the Longboat Key Club, Harbourside Ballroom, Sarasota, Florida from 4-6 PM. Memorial services on March 3, 2022 at St. Francis Xavier Church, 124 N. Spring Ave., La Grange, IL. Visitation in the church at 10 AM with a full Mass to follow at 11 AM. In lieu of flowers, the family asks that you consider donating to the Center for Social Concerns at the University of Notre Dame.

McGUE, STEPHEN CRAIG, age 74, of Sarasota, Florida, passed away on February 14, 2022, at Sarasota Memorial Hospital, from complications related to bladder and prostate cancer. Known as &#8220;Big Steve&#8221; to his family and those close... View Obituary & Service Information

The family of Stephen Craig McGue created this Life Tributes page to make it easy to share your memories.

Send flowers to the McGue family.