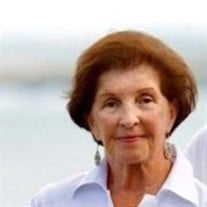 Suzanne ‘Sue’ Borgelt (1933-2021) Sue was born in Toledo, OH, on April 16, 1933, and was preceded in death by her parents Dorothy and William Sanderson and her sister Carol Lupica, all of Toledo, OH. She is survived by Burt, her husband of 68 years, her seven children, 16 grandchildren, 23 great grandchildren and one great-great grandchild. Sue was a graduate of Notre Dame Academy in Toledo and attended Bowling Green State University. Sue viewed her main responsibility in life as being a supportive wife to her husband and a good mother and mother-in-law to her immediate family: Linda and Joe Moravy, Julie and Ronald Williamson, Franklin and Tammy Borgelt, William Borgelt, Beth Ann and Edward Hancock, Gretchen Borgelt, and George and Amie Borgelt. A great homemaker and cook, besides her large family, guests were common in her home. Sometimes just a single person for dinner, other times a large group coming for a long weekend at the family ranch in southern Indiana where the extended family of 50 or so would also gather for family holidays. The family moved often. Wherever they lived, Sue would either start or become part of a neighborhood Women’s Bible study, Sue almost always acting as host. In the early years when her family was quite young, Sue organized and conducted neighborhood Good News Clubs in which she taught not only her own children, but neighborhood children that God loved them. Later as the family grew older and she had more time, Sue became active in Christian Women’s Clubs, going on to become presidents of clubs in Toledo, OH, Milford, DE and York, PA. Rotary International honored Sue by designating her a Paul Harris fellow for seeing the need of a YMCA in Brown County, IN, and with her husband Burt making construction financially possible. A structure was erected that has grown to become an important part of that community. The Valley View Christian Missionary Alliance Church was conceived over cider and donuts on her side porch. Today it is a thriving church serving several hundred people residing on the east side of York, PA. More recently, Sue was a charter member of Christ Church of Longboat Key. She found the site on which the church was erected and played an important role as a member of the church’s building committee. Sue was a willing volunteer, but insisted she not just do “busy work.” She sat with very sick patients for Hospice and drove a route for Meals on Wheels. Sue and Burt loved to travel. In later years, they especially enjoyed sharing their experiences with their immediate family. A family trip to somewhere in the world was customary every other year. Sue delighted in those trips and particularly the opportunity to show off her family. Sue’s legacy is found in her children. She has left a wonderful part of herself which can be seen in each one and not surprisingly now, also be seen in her grandchildren. A viewing will be held on Friday, August 20, from 4:00 to 8:00 p.m. at Toale Brothers Mortuary, 40 North Orange Avenue, Sarasota, and a memorial service in Sue’s honor will be held at 11:00 a.m. on Saturday, August 21, Christ Church of Longboat Key, 6400 Gulf of Mexico Drive, with a luncheon following the service. In lieu of flowers, memorial gifts may be made to Christ Church of Longboat Key.

The family of Suzanne "Sue" Borgelt created this Life Tributes page to make it easy to share your memories.

Send flowers to the Borgelt family.