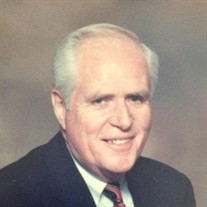 Theodore P. Dickinson “Ted,” age 86, of Cheshire, CT, and Nokomis, FL, died at Sarasota Memorial Hospital on February 16, 2022. Born on March 16, 1935, in Waterbury, CT, Ted was the son of the late Margaret (McAdam) and Theodore F. Dickinson. He is survived by his wife, Genevieve “Penny” (Mann), his five children, Sharon Dickinson (Ken Meltz), Susan Budris (Ed), Mark Dickinson, Stephen Dickinson, Marcia Arneson, and thirteen grandchildren: Anne (Philip), Jesse, John, Jacob, Emily (Leight), Patrick, David, Brian, Jeffrey, Andrew, Grace, Keith, Katherine. He was predeceased by his grandson Michael and his sister and brother-in-law Margaret and Thomas Golden. Ted was a US Navy Veteran, having served in the United States Naval Construction Battalions, better known as the Seabees, in the 1950s. He was employed by Chandler Evans, West Hartford, CT, in the Missile Systems Division for forty years and retired as a vice president and general manager in 1999. He attended Kansas State College, George Washington University, and the Hartford Graduate Center of RPI. Ted was very active in community affairs, serving on the Cheshire Town Council, Board of Education, and Democratic Town Committee. He was one of the developers of the Community Development Action Plan (CDAP), a member of the Charter Revision Commission, Chair of the Cheshire Ecumenical Committee, and was active with the Boy Scouts, working with them on their citizenship badges. One of his proudest accomplishments on the Board of Education was the provision of free drivers’ education for public school students. He was a communicant at Saint Bridget Parish in Cheshire Connecticut and Epiphany Cathedral Catholic Church in Venice Florida. Neighbors referred to him as the life of the neighborhood, a great guy with a quick sense of humor and a ready laugh. Ted was a life-long natural athlete, enjoying baseball, basketball, and ice skating in his younger years. He loved to create an ice-skating rink in the backyard when his children were young and probably spent as much or more time carefully tying laces as actually skating. With the passage of time and the aging of joints, he immersed himself in the game of golf, playing three times a week in retirement. He and Penny were members of Mission Valley Golf & Country Club in Nokomis Florida, enjoying many long-time friends and the staff at Mission Valley. As much as he loved golf, he loved his family more. He kept in constant contact with his grandchildren and children via all forms known to him: telephone, text messages, random articles he thought would bring a chuckle. But his favorite and most intentional communication was a card. Cards for birthdays, anniversaries, Halloween, Valentine’s Day, and other occasions. He loved finding just the right card and saving it until the day approached. In memory of Ted, please consider sending a random card to someone you love, as a token of affection and good humor. If you have read this far, it might have occurred to you by now that Ted thrived on making connections. He was not a soloist but a leader among many. His family, work, community involvement and interests were all imbued with his joy for creating and sustaining friendship, doing for others, sharing laughter, and accomplishing good works. He was happiest when he was offering a friend (new or old) a drink or a meal, a warm handshake, a joke or funny story. He was blessed with intelligence and good looks, and he used them as tools to be an influence for good. The world is a better place because he was in it. He will be missed. Friends and family are invited to a Memorial Mass at Epiphany Cathedral Catholic Church in Venice Florida on March 5, 2022, at 11am and also at Saint Bridget Parish in Cheshire Connecticut on March 19th at noon. Burial will take place at a later date.

The family of Theodore P. Dickinson "Ted" created this Life Tributes page to make it easy to share your memories.