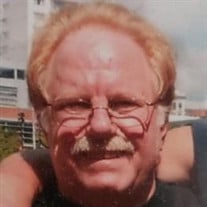 Thomas L. Currier of Sarasota Florida passed away unexpectedly at his home on October 15, 2020. He was 71. Tom was predeceased by his parents Virginia (Smith-Neitzel) and Robert Currier and Donald Neitzel (biological father). Tom was born in Milwaukee, Wisconsin on April 11, 1949 and he moved to Reading, MA with his family in 1956. He attended and graduated from Reading High School in 1967. He then went on to attend U Mass Amherst. After leaving college he co-owned a bar called Quick Silver in Amherst, MA. Tom moved to Sarasota, FL in 1970 and began his career at Marina Jacks where he went on to become the Beverage Manager from 1972 -1998. After retiring from Marina Jacks, Tom went on to work at Publix where he enjoyed working with fellow employees who became a second family to him. Tom was an avid sports fan who enjoyed following the New England Patriots, Boston Red Sox, and Boston Bruins. He loved golf and played often. He is survived by his cherished son Jonathan L. Currier, of Sarasota, FL, his beloved cat Reba, cherished brother of Robert Currier (predeceased) and wife Shirley of Meredith, NH, David Currier and his wife Martha of Cedar Point, NC, Steve Currier and late wife Ellen of Needham, MA, Barbara Currier of Mason, NH, and his ex-wife and friend Penelope Evensen, Sarasota, FL. Visitation will be at Toale Brothers 40 N Orange Ave, Sarasota on Sunday, October 25, 2020 from 5 to 7 pm. A memorial service held on Monday, October 26, 2020 at 2pm in the funeral home chapel.

Thomas L. Currier of Sarasota Florida passed away unexpectedly at his home on October 15, 2020. He was 71. Tom was predeceased by his parents Virginia (Smith-Neitzel) and Robert Currier and Donald Neitzel (biological father). Tom was born... View Obituary & Service Information

The family of Thomas L. Currier created this Life Tributes page to make it easy to share your memories.

Send flowers to the Currier family.