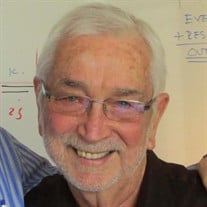 Tom Taylor (Thomas DeWitt Taylor Jr) enjoyed his last meal of hamburger and ketchup and hours later, on Sunday June 5th, quietly slipped away. With balance and breathing issues, years of using his walker 'Pal' while bumping into walls, and a scooter he used to ‘zoom’ around, he found himself ‘worn out’ but not too tired to share a story or a joke. In his last years, Dr. appointments were more of an event, he would start with an off-color joke while everyone in the room would blush as he would laugh with glee. And then he would say ‘cha cha cha’ as he pretended to dance in his walker. Born in New Smyrna, Florida, on January 3, 1936, he was the youngest in his family, and the youngest cousin out of the large Taylor clan. His parents, Stella and T. DeWitt Taylor were cautious, loving, and quiet people. And then came Tom. Always up for anything fun, he spent his youth in Pierson, Florida, racing cars, smoking cigarettes, and sneaking beers. He loved it. He was as smart as he was a fun-loving ‘thinker’ and taught his children to ‘let things go’ and ‘just be you’. Valedictorian of his high school class, his nickname was ‘Happy’. Searching for some stability, he joined the Air Force and served in Japan, which he fondly remembered because it ‘opened his eyes’ from the small town living he had enjoyed. When out of the Air Force, he finished college (with honors), married, had three kids (Kim, Dana, and Brett), moved out of Florida (they still talk about the day that Florida shook), got his master’s in engineering and landed at NASA where he worked as an engineer. He happily programmed computers for satellites. We are including this for his fellow NASA-ites: Tom helped develop one of the first computers to fly on an un-manned aircraft and oversaw the flight software for the Orbiting Astronomical Observatory (OAO). Then he took on the challenge of leading the spacecraft software section on the International Ultraviolet Explorer (IUE) and then the development of the ground systems for Upper Atmosphere Research Satellite (UARS). Working to head the ground system project for the Earth Observing Systems (EOS) was his final project. He divorced, married the love of his life (Roxie), gained two stepchildren (Chris, Brendan), and kept busy trying like hell to manage his large and rambling family. In his wee little bit of spare time, he taught college students and participated in 5K’s and marathons. He and Roxie were a ‘roving party’ and to their children’s complete embarrassment, they taught sex-education at their church (Unitarian), complete with sharing cookies of body parts to ‘help the kids understand’. Thrilled to retire from the government, they decided to travel and figure out their next steps. They got into boating and are famous among friends for borrowing a very LARGE sailboat and getting marooned the first night out. They woke up to the Coast Guard coming on board to actually move the boat. After small stints in various places, they called the kids to share ‘we bought two acres in Utah and are building a house’. The debate continued among the kids on who should go and bring them back to the east coast to see what the hell was going on. Nope, they stayed. They built a big ‘ski house’ with large windows to view the mountains and a hot tub where they would enjoy champagne while it was snowing. He had a robust retirement that included trips abroad, cruising, volunteer work (he was ‘Big Brother of the Year’), more volunteer work (Treasurer of his Unitarian Church), and even more volunteer work (Ogden Library Board), NYC theater trips, outings to listen to jazz (his absolute favorite music), skiing, and an annual summer solstice party where he would let loose (if looser was even possible). His love of baseball (‘a gentleman’s sport’ he would say) was well known among the family. With a move back to Florida (Jacaranda Trace) after Roxie’s passing, he became an avid Tampa Bay Rays fan and would watch games while sharing ‘THIS is heaven’. And then cooking entered his world. He would pit cherries for a pie, make meatloaf and cobbler weekly, and almost daily ate liver and onions and Waldorf salad. He made soul-touching friendships at his new habitat and organized a daily ‘happy hour’ so they could all visit and share stories. He would also test out his new jokes on the unsuspecting crowd and take part in their ‘talent show’ with his updated repertoire. His guiding philosophy was to do three things – do what you can, be happy with what you have, and be yourself. He would never ‘tell you what to do’ but instead would offer ‘you might think about it this way’ and helped all his adult children navigate life’s waters. His family Kim (Blaine) Corle, Dana (Ed) Wasloski, Brett (Lorraine) Taylor, Chris (Melissa) McEntee and Brendan McEntee are hosting a celebration of life at Jacaranda Trace on June 25th at 11:00am and will share stories, listen to jazz, and indulge in a drink or two with some fine food. If you are up to it, donations will be gathered for the staff at Jacaranda Trace. You can donate by contacting [email protected] He leaves behind seven grandchildren and one great-grandchild. With decades of fabulous memories, laughs, trips, good wine, great food, and daily jokes, he shared the one thing he treasured most, Roxie. “The event that gave me the most satisfaction, however, was my marriage to Roxie. We were married in 1973 and retired in 1994, twenty-one years of working life together. Roxie died in 2018 so we had twenty-four years of retired life together. Forty-five marvelous years with the woman I adored. I am a lucky man.” And now Tom/Dad/Pop-pops, it is time to fly. We know you and Roxie are back together causing trouble, sharing jokes, and embracing the love that sustained you both. Cha cha cha.

The family of Thomas DeWitt Taylor Jr. created this Life Tributes page to make it easy to share your memories.

Send flowers to the Taylor family.