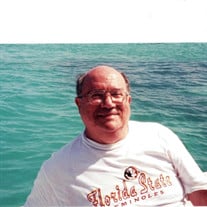 On May 30, 2020 we lost our beloved husband and father, Tom Ruth. Tom was born on April 14, 1938 in Craigsville, Pennsylvania. We will miss Tom the rest of our lives, but delight in sharing stories about him. Tom is survived by his wife of 55 years, Anne (McConnell); son Tom Jr. (Linda Ruth); daughter Anna (Paul Fratiello) and grandchildren, Madison, Jacki and Jillian. Tom was the youngest child of Bertha and William Ruth and is survived by his sister Gayle Woods of Washington State, sister- in law Betsy Baird (Chuck) and brother- in -law Ted McConnell (Ginny), and numerous nieces and nephews. Tom had a lot of love to give and considered friends and coworkers to be family. His children's lifelong friends were a joy to him, in particular David Tickner and Felicia Anderson. Tom loved to work and travel and was able to combine both when he served in the army and was stationed in Italy. After graduating from Kent State, Tom went on to earn two graduate degrees. His long career as a management accountant with the Harris Corporation and later Vitro Services Corporation, allowed him to travel the world. After briefly retiring when he and Anne moved to Sarasota in the late 1990s, Tom joined the Frederick Derr Company, where he worked until his death. His colleagues at Frederick Derr were a second family to him and offered him an extraordinary level of support and kindness through his illness. Tom had a strong sense of fairness; he believed in giving people second chances. He was a kind and generous soul, a lover of animals, and a die-hard FSU football fan. In lieu of flowers, if you would like to make a donation in Tom's memory, please consider giving to Save the Children or your local Humane Society or food pantry. We will plan a service in the future, when it is easier to have a large gathering. Finally, Tom's family would like to thank both Bright Star home health services and Tidewell Hospice services for the compassionate care they gave him.

On May 30, 2020 we lost our beloved husband and father, Tom Ruth. Tom was born on April 14, 1938 in Craigsville, Pennsylvania. We will miss Tom the rest of our lives, but delight in sharing stories about him. Tom is survived by his wife... View Obituary & Service Information

The family of Tom Ruth created this Life Tributes page to make it easy to share your memories.

Send flowers to the Ruth family.