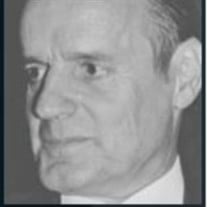 Victor Salvatore, Jr. of Sarasota, FL died peacefully at home on October 6, 2020. He was born December 6, 1921 to Victor Salvatore and Ellen Ashfordbye Ryerson Salvatore. His father was a sculptor who was born in Italy and came to New York as a child. His works are represented in The Metropolitan Museum of Art and in Cooperstown, NY. Victor's maternal grandfather, Arthur Larned Ryerson, an American businessman, perished on the Titantic in 1912. His grandmother, Emily Borie Ryerson was a Titantic survivor. Victor attended The Forman School, Deerfield Academy, the University of Virginia, and Princeton. He was a veteran of the Marine Corps in WW2, serving on Iwo Jima and in China. His career in journalism as newspaper reporter spanned the Washington Post, the Hartford Courant, Wesleyan University, and the Westchester Patent Trader. He was a frequent contributor to the Freeman's Journal in Cooperstown, NY, and authored an American Heritage article on Abner Doubleday and the myth of the founding of baseball. A voracious reader, he amassed a large collection of books and an encyclopedic range of knowledge. Although he lived in many places (New York City, Washington DC, Golden's Bridge, NY, Middletown, CT, and most recently Sarasota, Florida), he returned to the family home "Swanswick" on Lake Otsego in New York virtually every summer all his life. Located adjacent to the Otsego Golf Club (with which his family was associated since its founding in 1894, and on which board he served for many years), this was a perfect place for such an avid golfer. He was very generous and enabled his daughters to ski, horseback ride, golf and play tennis. In his later years was one fine backgammon player. He was predeceased by his two sisters, Vittoria Salvatore Demarest and Elena Salvatore Raymond. He is survived by his beloved wife Martha McGowan, his daughters Ellen Salvatore Cunningham, Andrea Salvatore Hook, and Joy Salvatore, as well as numerous grandchildren and great grandchildren. A memorial service will be held in Cooperstown, NY when circumstances allow.

Victor Salvatore, Jr. of Sarasota, FL died peacefully at home on October 6, 2020. He was born December 6, 1921 to Victor Salvatore and Ellen Ashfordbye Ryerson Salvatore. His father was a sculptor who was born in Italy and came to New York as... View Obituary & Service Information

The family of Victor Salvatore Jr. created this Life Tributes page to make it easy to share your memories.

Send flowers to the Salvatore family.