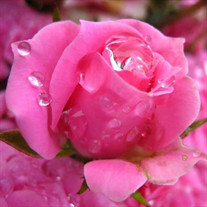 Virginia Alice Hernandez Howell, 94 years of age, passed away peacefully on July 7, 2021. Virginia was born in Albany, Georgia on May 17, 1927. As a daughter of the South she lived in various towns in Georgia and Florida throughout her life as well as spending years experiencing life in the country of Turkey, Alaska and Hawaii. Virginia is survived by her husband of 77 years, Robert W. Howell. She was always so very pleased to hear comments about the longevity of their marriage. Theirs was a true love story and inspiration for all who knew them. Other family survivors are daughter Kathy Breakfield (husband Rob) of Portland, Oregon, brother Al Hernandez of Dallas, Georgia, Daughter-in-law June Howell of Sarasota, three beautiful granddaughters - Corey Breakfield of Portland, Oregon, Melodie Tanigawa (husband Brett) of Portland, Oregon and Kristen Howell of Denver, Colorado and one great-grandson Jack Tanigawa of Portland, Oregon. Her son, Robert Philip Howell of Sarasota predeceased her in 2013. Working mainly in retail sales, she held the position of assistant buyer for Rich’s of Atlanta and later retired from Sears Roebuck in Anchorage, Alaska where she was Division Manager of commercial and contract sales. While living in Alaska, Virginia enjoyed the beauty of the state by taking many memorable camping trips with her husband, Robert. After retirement more happy memories were made when they spent six months in Hawaii where their son and daughter were living. Returning to Florida they settled in Sarasota in 1993. After family, Virginia’s two greatest loves were reading and volunteering wherever she felt she could make a difference for the better and make new friends. She devoted more than 20 years as a volunteer at Doctors Hospital of Sarasota where she enjoyed doing what was needed and did indeed form lasting friendships that brought her much happiness. The normal life cycle of aging has taken some dear friends but the ones that remain were very special to her and will be the same to the family. She touched the hearts and souls of many people during her vibrant journey through this world. As long as I live, she will still be my better half and my best friend. Finding her at an early age and having her by my side for 77 years was the best thing that ever happened to me. I will sorely miss her!!!! ‘Rest in Peace, Sweetie’.

Virginia Alice Hernandez Howell, 94 years of age, passed away peacefully on July 7, 2021. Virginia was born in Albany, Georgia on May 17, 1927. As a daughter of the South she lived in various towns in Georgia and Florida throughout her life... View Obituary & Service Information

The family of Virginia Alice Hernandez Howell created this Life Tributes page to make it easy to share your memories.

Send flowers to the Howell family.