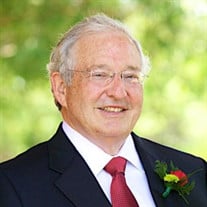 Walter D. Mazzanti, MD of Longboat Key, Florida, died of complications of the coronavirus infection (COVID-19), on April 13, 2020, in Sarasota, Florida. He was 75 years old. Dr. Mazzanti was a devoted, loving and generous husband, father and grandfather; a compassionate physician and skilled surgeon in his field of Ophthalmology; and a consummate gentleman with a keen sense of humor and zest for life. Walter was born in Brooklyn, NY to Josephine (Joan) and Walter Joseph Mazzanti and was raised in Brooklyn, NY. He attended grammar school at the St. Bernadette School and was graduated from St. Augustine High School, both in Brooklyn, NY. His undergraduate education was at Georgetown University in Washington, DC, where he was enrolled in the pre-medical training program and graduated in 1966. He attended Georgetown University School of Medicine in Washington, DC and earned his Doctor of Medicine degree from that institution in 1970. He completed a rotating internship at the St. Vincent‘s Hospital and Medical Center in New York, NY, followed by a residency in Ophthalmology at the Montefiore Medical Center and the Albert Einstein College of Medicine, Bronx, NY, under the direction of Dr. Paul Henkind. Dr. Mazzanti then served as a Lieutenant Commander in the United States Navy and was stationed at the Philadelphia Naval Hospital in Philadelphia, PA from 1974 to 1976. Following his service in the Navy, he completed a fellowship in Cornea and External Disease at the Wills Eye Hospital in Philadelphia, PA, under the direction of Dr. Peter Laibson. He was Board certified by the American Academy of Ophthalmology. Walter met the love of his life, Dr. Rosemary Albano, at Georgetown University School of Medicine in Washington, DC where they were enrolled in the same medical school class and worked together during their clinical training years in medical school. Following their first date in early 1971, they were engaged at the New York Metropolitan Opera House, following a performance of La Bohème with Luciano Pavarotti and were married following a five-month courtship. After Walter’s tour of duty in the Navy, they settled in North Caldwell, NJ, where they raised their two sons, James and Carl. Walter had offices for the practice of Ophthalmology with a subspecialty in Cornea and External Disease and Corneal Surgery in West Caldwell and Montclair, NJ and was on the Medical staff at the Mountainside Hospital, in Montclair, NJ. Walter and his wife were in the practice of Ophthalmology, together, and they retired 17 years prior to Walter’s death. Walter, with his wife of 49 years, lived a full and special life, in which their lives were inextricably intertwined in all its dimensions. They were avid travelers and lovers of the Arts, especially the opera. Their travels, many of which with their family, included trips to Antarctica and the Arctic, including the Svalbard Archipelago and Greenland; Iceland; South America with multiple trips to Chile, including Torres del Paine National Park, Easter Island and the Straits of Magellan; Argentina; Ecuador and the Galapagos Islands; Peru, Cuzco, and Machu Picchu; Central America, including trips to Panama and the Panama Canal and Costa Rica; New Zealand; French Polynesia including the Society and Marquesas Islands; multiple trips to Africa, including South Africa; Botswana and the Okavango Delta, the Moremi Game Reserve and Chobe National Park; Victoria Falls in Zambia and Zimbabwe; Namibia; and Kenya and Tanzania including the Great Wildebeest Migration; and multiple trips to Europe, the Caribbean, and multiple National Parks and States within our United States. Walter and his wife were Patrons of the New York Metropolitan Opera in New York, NY for many years; and later, were Coproducers of the Sarasota Opera and donors to the Sarasota Orchestra, in Sarasota, FL. They were members of St. Mary’s, Star of the Sea Church, Longboat Key, FL. Walter and his family spent their summers on Long Beach Island, NJ and were members of the Little Egg Harbor Yacht Club in Beach Haven, NJ. Walter, with his wife and family, enjoyed bicycling; boating; sailing, including racing their Catboat, the “After You”, with the Little Egg Harbor Yacht Club; working around his home, a so-called Mr. Fix-it; and being in the company of his family and friends. He was known for his keen sense of humor; his seemingly unlimited store of jokes; and being in his presence meant numerous opportunities for laughter. His life was well spent and full of love. Walter is survived by his wife, Dr. Rosemary Albano; his sons, James and Carl, and daughter-in-laws, Jennifer and Anna; his four grandchildren, Sofia, James (JJ), Enzo and Eli; his sisters, Cindy (Nicholas) Incontrera and Kathryn (John) DeYoung; sister-in-law, Patricia DeMaio; brother-in-law, Joseph Albano; and his nieces and cousins. Due to the dangers posed by the coronavirus pandemic, interment and a celebration of Walter’s life will be private and arranged when all can gather safely. Memorial donations may be made in memory of Walter D. Mazzanti, MD to the Wills Eye Hospital Cornea Service, with checks payable to “The Wills Eye Foundation”, 840 Walnut Street, Philadelphia, PA, 19107 or by calling 267-765-0062 or to Georgetown University School of Medicine by calling 202-687-1690 or by mail to Georgetown University, Gift Processing, Dept. 0734, Washington, DC, 20073, indicating that your gift is to be designated to the School of Medicine (SOM) Scholarship Fund, in memory of Walter D. Mazzanti, MD.

Walter D. Mazzanti, MD of Longboat Key, Florida, died of complications of the coronavirus infection (COVID-19), on April 13, 2020, in Sarasota, Florida. He was 75 years old. Dr. Mazzanti was a devoted, loving and generous husband, father and... View Obituary & Service Information

The family of Walter D. Mazzanti, MD created this Life Tributes page to make it easy to share your memories.

Send flowers to the Mazzanti, family.