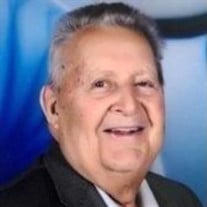 Walter Richard Obermeier peacefully passed away on January 29, at age 83, with his beloved wife and family at his side. Born in Milwaukee, Wisconsin August 19, 1937, he resided in Wisconsin and later, retired to Venice, Florida where he enjoyed the year-round warm weather and sunshine. Walter was married, for 61 years, to the love of his life, Mary Collins Obermeier, whom he met and married, in 1960, while serving in the United States Air Force, in Newfoundland Canada. After receiving his honorable discharge from the Air Force, Mary and Walter moved to Wisconsin and had four children, Walter, Lynn, Richard and Joel, who were the light of his life. Walter's life can best be defined by his devotion to all things family. Whether it was building a dance studio for his daughter, allowing all the neighborhood kids to hang out at the family pool, playing competitive games of Basketball in the driveway and sleep-overs followed by Walter cooking breakfast for all. He both played and coached basketball and softball and never lost his love of sports. Walter was known to drive 3 hours to watch his grandsons play high school basketball. After starting a successful mortgage company and mentoring many people in the business, Walter retired to enjoy his family, traveling all over the world, and golfing while wearing his colorful fun outfits. Walter is survived by his wife Mary, his children Lynn (Joseph) Fasi and Richard, Ruthann (sister), Susan (sister), Wendy (sister), 8 grandchildren, one great granddaughter and many nieces, nephews and family members. He was pre-deceased by his Mother and Father, Laura and Walter Obermeier, Joel (son), George (brother), Loretta (sister) and Laurie (sister). The Obermeier Family will be holding a celebration of Walter’s life at New Life Church 5800 S Tamiami Tr Venice FL on Tuesday February 9 at 10 am. and at Life Church 3285 N Calhoun Road Brookfield WI on Saturday February 27th at 10 am. In lieu of flowers, donations can be made to Memorial Fund on www.gofundme.com https://www.gofundme.com/f/walter-r-obermeier-memorial?utm_source=customer&utm_medium=copy_link&utm_campaign=p_cf+share-flow-1

Walter Richard Obermeier peacefully passed away on January 29, at age 83, with his beloved wife and family at his side. Born in Milwaukee, Wisconsin August 19, 1937, he resided in Wisconsin and later, retired to Venice, Florida where he enjoyed... View Obituary & Service Information

The family of Walter Obermeier created this Life Tributes page to make it easy to share your memories.

Send flowers to the Obermeier family.