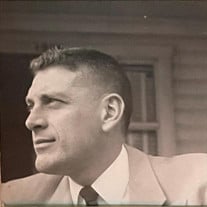 Warren Rahn, beloved husband, father, grandfather, and retired Airforce Major passed away peacefully on April 21st, at the age of 97, surrounded by his loving family. He was a devout Christian and applied it to all aspects of his life. Warren was born in Chicago, Illinois to the late Carl Rahn and the late Katherine Markowski Rahn. He had two older siblings, the late Carl Rahn and the late Matilida “Tootie” Hahn. He was a devoted and loving husband of 64 years to his bride and is survived by Helen Cooper Rahn of Sarasota, Florida, His son: Michael Carl Rahn, of Sarasota, Florida, two daughters: Lisa Rahn Finkelstein and Katherine Rahn Christensen (Jay Christensen) of Apollo Beach, Florida. He is also survived by two grandchildren: Christopher Rahn (Anastasia) of Pensacola, Florida and Bradford Rahn (Katie) of Clarkston, Michigan; two great grandchildren: Emery Rahn and Briggs Rahn; niece: Charlene Urbas of Sarasota; great-nephew Derek Conley of Sarasota, as well as many other nieces and nephews. In 1942, Warren graduated from Calumet High School in Chicago, Illinois. After graduation, he enlisted in the US Army Aircorp and served from 1943-1946, including WWII from 1943-1945. He received his “wings” as a radio operator flying on a C-47 where duties included dropping paratroopers, food, supplies and equipment, as well as, medical evacuation of wounded soldiers. During this time, he received his commission as a Second Lieutenant and continued serving in the US Airforce Reserves until retiring as Major in 1984. Warren studied at a private Christian college, Elmhurst University, for two years and transferred to Michigan State University, graduating with a Bachelor’s degree in Business Administration. In 1950, he worked in Chicago for 3 years then on to Atlanta, GA. for 2 years with Kaiser Aluminum Co. From there he moved to Sarasota, Florida to begin a career in banking at Citizens Bank of Sarasota, where he met his lovely wife Helen. His career in banking landed him as Vice President of a bank in Alexandria, Virginia and continued on until bringing him back to Florida working at Sun Bank in Orlando. In 1975, God led him to retire from the commercial banking industry and he began working for Reverend Billy Graham in the Office of Development – which brought him back to Sarasota. He worked with the Billy Graham Evangelistic Association for 14 years until retiring in 1989. Warren loved music and played the accordion in his younger years! Big Band, Classic Country and Gospel music were among his favorites. He also enjoyed watching football, baseball, golf, classic movies and had a passion for airplanes. In his earlier years, he trained and received a pilot’s license for single engine planes - flying by sight and manual instruments. He was heavily involved with his church and for many years served as a Deacon at First Baptist Church. He also served on the budget and finance committee, pastor search committee and he was heavily involved with his Sunday School and Bible study groups. This is where he and his precious wife met and made some of their life-long friendships - for over 50 plus years! Warren was a very humble, traditional, simple man who dearly loved his family. He always kept his priorities “God, Wife, Family and Country.” Up until the very end of his life, he would meet a perfect stranger and by the end of their conversation, that stranger would be his friend. They would know how he met and adored his wife, how proud he was of his three children, how much he loved his grandchildren/ great grandchildren and most importantly, how he came to know Jesus! A Celebration of Life service will be held at the Sarasota National Cemetery, 9810 State Road 72, on May 4, 2022 at 10:30 a.m.

Warren Rahn, beloved husband, father, grandfather, and retired Airforce Major passed away peacefully on April 21st, at the age of 97, surrounded by his loving family. He was a devout Christian and applied it to all aspects of his life. Warren... View Obituary & Service Information

The family of Warren Rahn created this Life Tributes page to make it easy to share your memories.

Send flowers to the Rahn family.