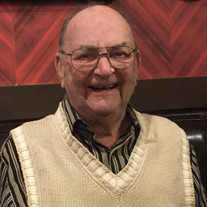 William (Bill) Warren Charron, age 93, of Bradenton, Fl., passed away on Thursday, August 5, 2021. He was born January 10, 1928, son of the late William and Mary Charron. Bill enlisted in the Army in 1946 and received Victory and Army of Occupation metals during his service. Early in his career, Bill worked for Chrysler Automotive Company where he met the love of his life, Vivian. They were married August 22nd, 1953. Shortly after their wedding, Bill was hired in the engine engineering group of the Ford Motor Company. As an engineer raising five children with his wonderful wife, he went to night classes at Lawrence Technological University in Southfield, MI. Bill earned his Bachelor of Science degree in Mechanical Engineering in 1966. Shortly thereafter, he became Manager of Ford’s Carburation and Fuel Systems engineering department, retiring in 1983. Bill and Vivian were married for over 60 years, and during that time lived in their homes in Bradenton, FL during the winter, and Central Lake, MI in the summer. They loved to travel visiting Europe, Hawaii and other locations in the United States. Bill was a loving and wonderful father, grandfather and great-grandfather! He enjoyed playing in golf leagues, but especially enjoyed playing golf with his children and grandchildren. He loved to take them for boat rides, and engage in various water sports on Intermediate Lake in northern Michigan. He took great joy in following his grandson’s career in major league baseball. As a hobby, he designed and built painted glass windows. Bill was a center of refuge, and will have an influence and lasting impact on his family. He left an example of unconditional love for his children and grandchildren and taught them to respect and love each other despite their differences. God is to be thanked for giving a wonderful heritage and example to follow. Bill was the husband of Vivian J. Charron, who preceded him in death in 2014. A dear father of William A. (Meriellen) Charron, Paul L. (Susan) Charron, Linda M. (Robert) Richardson, Chris W. Charron and Susan E. (Jerry) Donella. Loving grandfather of Kristen (Matt) Herron, Lianne (Michael) Coad, Paul (Claire) Charron, Elizabeth (Kevin) Vessels, Andrew Charron, Albert (Kylie) Richardson, Nichole (Josh) Roenicke, Ian (Chelsey) Desmond, Paige Charron and Christopher Charron. Loving great-grandfather of Gavin Herron, Bennett Herron, Parker Charron, Conner Charron, Harper Charron, Taytum Roenicke, Desmond Roenicke, Piper Roenicke, Dylan Roenicke, Grayson Desmond, Cruz Desmond, Dakota Desmond, Ashton Desmond, Naomi Desmond, Audric Butikofer and Vivienne Coad. Family will receive friends Monday, August 16, 2021 from 8:30am until 9:30am at Toale Brothers Funeral Home, 40 North Orange Avenue, Sarasota, FL 34236. A graveside memorial service will occur beginning 10:00am at the Sarasota National Cemetery, 9810 SR-72, Sarasota, FL 34241.

William (Bill) Warren Charron, age 93, of Bradenton, Fl., passed away on Thursday, August 5, 2021. He was born January 10, 1928, son of the late William and Mary Charron. Bill enlisted in the Army in 1946 and received Victory and Army of Occupation... View Obituary & Service Information

The family of William (Bill) Warren Charron created this Life Tributes page to make it easy to share your memories.

Send flowers to the Charron family.