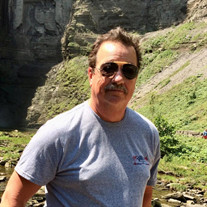 Born April 2, 1958 in Memphis, Tennessee to the late Margaret "Peggy" and Joseph Kallaher, William "Bill" Joseph Kallaher passed away suddenly at the age of 63 on March 30, 2022 in Sarasota, Florida. Bill joined the United States Navy in 1977 and served for 6 years as an Aviation Ordnancemen Petty Officer 3rd Class aboard the USS Forrestal. After moving to Florida in 1984, he worked as a plant manager for a concrete manufacturing company before joining Honeycomb Company of America manufacturing aircraft structural components for the past 13 years. Bill cherished his time spent on his hobbies, notably his art. Every weekend he could be found in his home studio painting an oil landscape while listening to the radio. When not spending time on his art he loved to go explore antique stores and flea markets. An avid handyman and carpenter, Bill was always dreaming up a new project to craft or fix. He enjoyed working outdoors, volunteering his time for local wildlife non-profits, and visiting art museums with his family. Bill will be remembered as a loving husband, dedicated father, and exceptional artist. He was hardworking, curious, creative, funny, thoughtful, and resilient. He is survived by his dear wife of 37 years, Suzanne Kallaher, daughter Amelia Kallaher, brother Richard "Ric" Kallaher, brothers-in-law Wayne Beard, Scott Wiles and Kurtis "Kurt" Wiles, his sisters-in-law Liz Kallaher, Theresa Wiles, and Vicki Wiles, his nephews Kyle Beard, Sean Wiles, and Bradley Wiles and his nieces Sara Wiles and Lauren Wiles, and his in-laws Jerald and Darlene Wiles. He was predeceased by his sister Maragret "Lisa" Beard, his sister-in-law Sila Wiles and brother-in-law Michael "Mike" Wiles. A graveside service for family and friends will be held at Sarasota National Cemetery on April 12, 2022 at 1:00 pm with an open house for remembrance immediately following at the family home at 3911 De Foe Square, Sarasota, FL 34241. Memorials may be given in his name to the Sarasota Audubon Society, The John and Mable Ringling Museum of Art, and Mote Marine Lab and Aquarium. Flowers may be sent to the family at their home address.

Born April 2, 1958 in Memphis, Tennessee to the late Margaret "Peggy" and Joseph Kallaher, William "Bill" Joseph Kallaher passed away suddenly at the age of 63 on March 30, 2022 in Sarasota, Florida. Bill joined the United States Navy in 1977... View Obituary & Service Information

The family of William "Bill" Joseph Kallaher created this Life Tributes page to make it easy to share your memories.

Send flowers to the Kallaher family.