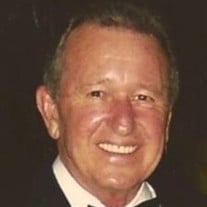 William B. Thompson, Jr. (Bill) 78 of Sarasota, FL and formerly of Warren, Ohio was born on November 10, 1942. He passed peacefully at his home on Monday, July 12, 2021. He graduated from Warren G. Harding High in 1960. Most of Bill’s working career was in the car industry in Warren. He went from “sudsbuster” to car dealer. After 35 years in the car industry, Bill and Karen relocated to Sarasota in 1990 to join their children and start a family business. Bill’s greatest joy in life was the 55 years spent with his wife, Karen, raising their three children and seven grandchildren. Family was always a top priority. Whether you called him Bill, Dad, Billy T or Poppa, he was loved by all who were fortunate to know him. Bill was preceded in death by his wife, Karen. He is survived by his three children. Mickey (Jennifer) Thompson, Amy (Brad) Long, and Halle (Guy) Cesta. Bill was also blessed to spend the past four years with Emily McGowan who brought him such joy in his final years. He was a beloved grandfather known as “Poppa” to Taylor, Corey, Gabriella, Isabella, Guy Anthony, Harrison, and Carson. Bill also leaves behind his dearly loved pets, Harper and Jill. Bill was an avid sportsman who had an incredible love for the water either on his boat or a fishing pole in his hand. He spent over a decade on the Board of Directors and served on many committees at the Field Club. His favorite contribution was to be “The Fleet Captain” planning many trips and events for his friends and fellow members. Bill was a sports fan his entire life cheering on his favorite teams from the Cleveland Browns to Tampa Bay Buccaneers, Lightning and Rays. He was the epitome of loving husband, father, grandfather, and friend who will be deeply missed. A memorial service will be held at Church of the Incarnation, 2901 Bee Ridge Road, Sarasota 34238 on Monday, July 19th at 1:30 pm. Immediately following is a celebration of Bill’s life at Gecko’s “The Signature Room” 5585 Palmer Crossing Circle, Sarasota 34233 from 3:00 pm to 5:00 pm. Memorial Contributions may be made to the Surfside victims at Unitedwaymiami.org Operation Helping Hands.

The family of William (Bill) B. Thompson Jr. created this Life Tributes page to make it easy to share your memories.