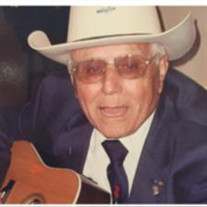 William “Fain” Blevins, 93, of Bradenton, passed away on March 4, 2022, at Blake Hospital in Bradenton, Florida. Fain was born in Bristol, Virginia to Eugene and Kate Blevins (Starnes) on February 16, 1929. He graduated from Lincoln High School in Ferndale, Michigan and was an Army Combat Veteran of the Korean War. He was honorably discharged in 1953 and married his sweetheart, Gloria Marzolf, on Valentine’s Day in Royal Oak, Michigan that same year. He went to Electrical School and worked as an electrical foreman at the General Motors Tech Center in Warren, Michigan for 30 years. He was a talented Country Music Singer and enjoyed singing at a variety of venues. He was also involved in the Masons, including Knights Templar and The Shrine. In 1977, he became a Shrine clown and entertained at the Detroit, Michigan and Sarasota, Florida Shrine Circuses. He spent many volunteer hours making children smile at the Shriners Children's Hospital in Tampa and always volunteered at the Children’s Flight to the North Pole at SRQ. He was a charter member of Braden River Presbyterian Church and a beloved Husband, Brother, Father, Grandfather, and Great-grandfather. Fain is preceded in death by his parents, his only sister, Mary Ruth Brady, and his oldest brother, Jack Harold Blevins. He is survived by his wife of 69 years, Gloria Blevins (Marzolf), brothers Lyle Blevins (Emily), and Fredie Joe Blevins (Bonnie), his daughter, Diane Sanders (Robert), and son, Richard Blevins; four grandchildren, Ashley Vestrand Speigl (Michael), Matthew Vestrand (Caisie), Tiffany Blevins Branscombe (Tyler) and Justin Blevins (Genesys); and twelve great-grandchildren, Braxton, Brenton, Brooklyn, Braden, Bowen, Christian, Ashton, Aidyn, Mykenna, Lakelyn, Kinsley, and Linkin, and many more nieces and nephews. A short visitation will begin at 11:00 AM, on March 21, 2022, at Toale Brothers Funeral Home, 40 N. Orange Ave., Sarasota, Florida. A procession to the Sarasota National Cemetery, 9810 State Road 72, Sarasota, FL 34241, for burial at 1:00 pm. The military service will begin at 2:30 pm. Eulogies and a celebration of life will follow at 3:30 pm at the Sahib Shrine Temple 600 N. Beneva Rd., Sarasota, Florida. Memorial contributions may be sent to Shriners Hospitals for Children, Attn: Processing Center, PO Box 947765, Atlanta, GA 30394 or online at www.lovetotherescue.org/memorial-gifts/.

The family of William "Fain" Blevins created this Life Tributes page to make it easy to share your memories.

William “Fain” Blevins, 93, of Bradenton, passed away on March...

Send flowers to the Blevins family.