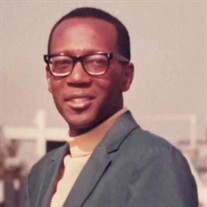 William Arthur Medhurst October fondly known as “Bill” was born on May 6th, 1931 to Rosamond and William Arthur October Sr. in Guyana, South America. As God would have it, William left Guyana in 1965, married the love of his life, Dorrie October (nee Griffith) and settled in Brooklyn, New York. William left New York for awhile to continue his education at Balham & Tooting College of Commerce in London, England. He returned from London, attended Baruch College in Manhattan and graduated with a Bachelor Degree in Business. After graduation William worked as a Controller for Laventhol & Horeath in New York. In 1974, Screen Gems-Columbia Music,INC hired William as an Operating Accountant. In the 80’s William worked for companies such as CBS Music Publishing, Cherry Lane Music Company, The Harry Fox Agency Managing Royalties and accountant duties. In 1990 William and Dorrie moved from New York to Sarasota. While in Florida he landed a job at Tournament Players Club at Prestancia in Sarasota overseeing the accounting department. He also joined Senior Friendship Center in 1998 were he held the position of Assistant Nutrition Coordinator. William was active in his community by sharing the gospel and serving others. He was a team member of Kairos prison ministry, assisted with meals on wheels, led Cursillo workshops and volunteered at Manor Care and also at Salvation Army. In addition he was also an active member of the Church of the Holy Spirit. His passion for serving the Lord was shown to all. Singing spiritual songs in his Tenor tone and playing the harmonica encouraged everyone who listened. Sharing Scriptures and serving brought Bill great joy. William was defined as a “Gentleman” and an articulate man. He would garden and cut “October Roses” for anyone he came into contact with. He shared his wisdom, and generosity without limit to all. William usually had an interesting story to tell, a clever joke to share, and displayed his fancy footwork by dancing a jig. Anniversaries, Birthdays, graduations, births and “just because” were appropriate for receiving a blessed handwritten card from William. Upon his retirement he enjoyed jigsaw puzzles, seduko,crossword puzzles, and spending time with his adult children and grandchildren. In April 2020 William was diagnosed with Chronic heart failure. His desire was to “go home so he can go home”. On July 6,2020 he went home. William leaves behind Dorrie his loving wife of 55 years; his sister Claudette Cox, his daughter Roxanne Gleave, his daughter Michelle Obateru, his son Ian October, son-in-law David Gleave, son-in-law Femi Obateru, daughter-in-law Myrtle October, niece Renee Cox-Jenkins ,7 Grandchildren Stewart, Johnathan, Rebecca Gleave; Olu and Ife Obateru, Ethan and Ahron October; and many close relatives, extended family members and friends. He will live in our hearts forever.

William Arthur Medhurst October fondly known as &#8220;Bill&#8221; was born on May 6th, 1931 to Rosamond and William Arthur October Sr. in Guyana, South America. As God would have it, William left Guyana in 1965, married the love of his life,... View Obituary & Service Information

The family of William Arthur Medhurst October created this Life Tributes page to make it easy to share your memories.

Send flowers to the October family.