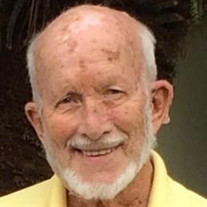 William James Steen of South Venice, FL passed away on Saturday morning February 29, 2020 after a short illness. He was 88 years young. Affectionately known as Bill, Brother, Dad, Uncle Bill and Papa Bill, he was born and raised in Brooklyn NY. He attended Brooklyn Technical High School where he learned the carpentry trade. Bill was called to serve in the Air National Guard during the Korean War with the NY 106 Bomb Wing at what is now known as March Air Reserve Base in Riverside County, CA. He worked in the intelligence division as an Airman 2nd Class. Bill took advantage of the GI bill and attended Brooklyn Community College. He met the love of his life, Lucille White and proposed marriage to her after class on the trolley car. They were married near 65 years and raised 4 children moving from Brooklyn to Mahopac, NY and then settling in Bristol, CT. At the time of Bill & Lucille’s retirement, they had been living in South Windsor, CT. They said “enough of the snow - let’s head south! We need “More Time For Life.” In February 2001, they moved into their newly built home in South Venice. Lucille preceded his death almost two years to date of his passing. Bill was the ultimate salesman. He started at the Brooklyn Union Gas Company and then progressed to the Heating Ventilation Air Conditioning (HVAC) industry with Bryant Equipment Corporation in CT. He owned and operated several HVAC supply houses. Bill went on to invent new environmental friendly air quality products. One in particular was called the Nascent System. Bill traveled to Medellin, Columbia in South America to personally supervise the installation of a unit at a cement factory. It cleaned up the air of the entire community – no more line dryed dirty laundry and fresh particle free clean fields for farming. Through the years, Bill made time to volunteer with many community organizations. The last was the South Venice Civic Association as a board member and president. He is survived by his sister Linda Howard of Henderson, NV; children John Steen of Las Vegas, NV, Thomas Steen (& wife Tina) of Simsbury CT, Cynthia Steen Petti, Venice, FL formally of Tucson, AZ and Suzanne Steen of Newburyport MA. Grand adults include Ryan Steen of Providence, RI; Corey Steen of Denver, CO; Jessica Munro of Dallas, TX; Shannon Munro of Tampa, FL & Tyler Steen - an angel who greets him in Heaven; Cousins in Northern Ireland and Down East Maine USA, and many nieces, nephews and friends. An internment ceremony was held at the Sarasota National Cemetery on March 4, 2020. Memorial contributions may be made to Tidewell Hospice Philanthropy Dept., 5955 Rand Blvd., Sarasota, FL 34238. To send condolences please visit www.Toalebrothers.com. Toale Brothers Funeral Homes, Ewing Chapel has been entrusted with the arrangements.

William James Steen of South Venice, FL passed away on Saturday morning February 29, 2020 after a short illness. He was 88 years young. Affectionately known as Bill, Brother, Dad, Uncle Bill and Papa Bill, he was born and raised in Brooklyn... View Obituary & Service Information

The family of William J. Steen created this Life Tributes page to make it easy to share your memories.

Send flowers to the Steen family.