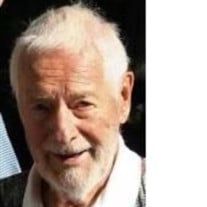 We are deeply saddened to share the passing of William James Wottowa on November 24, 2020. William James Wottowa was born on July 31, 1925, in Belleville, Illinois, the third of four children, to Rudolph and Mary Wottowa. When Bill was in 2nd grade, the family relocated to Detroit, Michigan. Bill graduated from St. Joseph’s Commercial College High School, and worked at Rotary Electric before joining the Army in World War II. He worked in the military police, including a stint at Leavenworth Prison in Kansas during Christmas, relieving the prison guards for the holidays. After the war, Bill was hired by Barney Keywell, beginning his prolific career in the scrap metal and stainless steel business. Bill worked his way through Keywell, until he was President, and retired in 1985. As a mentor, Bill modeled negotiating with mindfulness, dignity, and strength. He was a leader in the industry, both internationally and domestically, serving as a Director of the Institute of Scrap, Iron, and Steel. Bill married the love of his life, Imogene, on October 28, 1952 at the Blessed Sacrament Cathedral in Detroit, and settled into a home on Green Lake. Soon Bill and Jeanne were busy raising 5 children. They were active sailors on Green Lake, and avid snow skiers. Bill and Jeanne moved to Cass Lake in 1968, where they often hosted summer parties for extended family and friends. Bill continued to sail, and could water ski around Cass Lake without getting his hair wet. Snow skiing was a passion that Bill passed on to his 5 kids, and he enjoyed skiing with kids and grandkids into his 80’s. He spent many a frigid weekend in northern Michigan working as a starter for ski races, mustache covered with ice. After retiring in 1985, Bill and Jeanne established homes in a trifecta of their favorite spots: Torch Lake in Northern Michigan, Telluride, Colorado, and Grand Cayman, where they enjoyed sharing time with family and friends. For his 70th birthday, Bill commissioned a wood boat from Van Dam Custom boats, a replica of a Coast Guard boat he had in the 1950’s. The Ghost was his pride and joy, with its rumbling engine and show stopping magnificence cruising around Torch Lake. The Manic Mischief was Bill’s Cayman boat, a cheery yellow fishing boat, ferrying snorkelers, divers, and fishermen where they needed to go. Bill was a true patriarch, leading his family with faith and fun. Though he could be a stern and imposing figure, Schmedley, or Schmed, as he was known, was kind and compassionate, always quick with a joke and a smile. Bill had nicknames for everyone, from Jake to Hortense, to the point where real names and nicknames became a blur. His generosity was legendary, and he enjoyed mentoring his family in the old school style of business that brought him success. Though he and Jeanne did not attend college, they were adamant about ensuring that their children and grandchildren had access to higher education. Never afraid to roll up his sleeves and work, Bill loved to work outdoors, from raking leaves and picking up sticks, to amassing the biggest rocks he could find, and commissioning gigantic wood sculptures. There was always an outdoor project he was working on. Throw in some heavy machinery, big trucks, maybe a crane, and Bill was all set. Most of all, Bill was the best father, grandfather, great grandfather, brother, and father in law that anyone could ask for. Some of the important lessons he passed on: there is always room for ice cream; soup can never be too hot; don’t be afraid to sing “Oh what a beautiful morning” at the top of your lungs; stretch every day; always have Carmex and Kleenex close at hand; learn how to drive a stick and drive it well; don’t stack plates at the table when clearing; dinner is at 7:00; a drawer full of sunglasses is always a good idea; nickname the ones you love; don’t be afraid to make a change; own your struggles and support others as they battle theirs. Loving husband of Imogene Mary Wottowa. Loving father of Susan Stevens, Sally (Viktor) Brandtneris, Will Wottowa, Peter Wottowa, and Amy (Michael) Melone. Proud grandfather of Tracey (Mike) Stein, Jay (Cassie) Van Tuyl, Viktor (Sarah) Brandtneris, Alexander Brandtneris, Clay Larson, Savannah Larson, and Allison Hastings Wottowa. Proud great grandfather of Gracen, Jack, Jada, Coral, and L.J. Beloved brother of Carol Wozniak, brother in law of Wandy (Jim) Lowe. Beloved uncle of many nieces and nephews. Beloved father in law of Jeffrey Larson and Robin Stanley. Beloved father of Henri the poodle. Interment will be at Oakland Hills Memorial Gardens in Novi, Michigan.

The family of William James Wottowa created this Life Tributes page to make it easy to share your memories.

We are deeply saddened to share the passing of William James...

Send flowers to the Wottowa family.