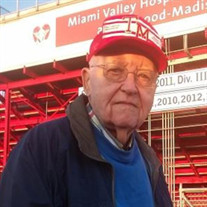 John Hathaway Butler Jr, 85, of Sarasota, Florida passed away peacefully at his home on Tuesday, November 10, 2020 after eight months of in-home Hospice care. He was born May 9, 1935 in Dayton, OH to Dr. John H. Butler and Dorothy (Resh). He is survived by his loving wife of 57 years, Linda (Knoch), his three sons: John, Robert, and Matthew (Annette Rezek), grandchildren: Clara (Aaron Jones), Jack, Grace, and Nathan, and his sister, Dorothy Pitser. John grew up in Ohio loving the out of doors and all of nature; he enjoyed scouting, camping, fishing, hunting, baseball, football, gardening, music, and cooking. He took seriously God’s directive to have dominion over and take care of planet earth. John’s love of nature inspired him to a career in teaching science, biology, and ecology. He would often tell his students to “remember the Lorax”. He shared his love of nature with his wife and sons on family vacations at Rice Lake and Manitoulin Island in Ontario, Canada, and on Christmas breaks to Sarasota, Florida for boating and fishing in Sarasota Bay, swimming in the Gulf, and watching sunsets at Siesta and Lido Key. John graduated from Butler Township High School in Montgomery County, OH in 1953. He attended Ohio University, Athens, OH where he was a member of Phi Kappa Sigma Fraternity, Beta Zeta Chapter. He enlisted in the United States Army in 1957 serving in the Third Infantry Division, Military Police Detachment. He was stationed in Wurzburg, Germany for 18 months. In 1959 he returned to Ohio University completing his Bachelor of Science Degree and Bachelor of Science in Education Degree in 1960 and 1961. He earned his Master of Education Degree at Ohio University in 1966. John began teaching as a substitute teacher in the Dayton City Schools in 1961. He taught four years at Buchtel-York High School in Athens County, OH where he was also assistant football and basketball coach. He taught 24 years at Trotwood-Madison High School in Montgomery County, OH. He coached 7th then 9th grade football and was assistant varsity football coach for 14 years with eight years as defensive coordinator. He was head football coach from 1981 to 1985. He was well-known for inspiring “Believer Fever” in the Trotwood community as he coached an outstanding group of young athletes assisted by an outstanding coaching staff to a perfect 10 - 0 season and conference championship. This team was the first in the school’s history to compete in the Ohio High School Athletic Association Division II State Football Playoffs in which they placed 2nd in the State. John held a special place in his heart for the students he was privileged to teach, the athletes he coached, along with the teachers, staff, and coaches with whom he formed special bonds over the years. After 29 years in the classroom John retired from full-time teaching in 1989. In 1997 John and Linda retired to Sarasota, Florida where John took great pleasure in taking family and friends out in his boat to fish in Sarasota Bay. When his beloved grandchildren would visit from Ohio he would always prepare for them a breakfast of his special sausage gravy and biscuits. In lieu of flowers contributions in memory of John H. Butler Jr. can be sent to: First Congregational United Church of Christ, 1031 S. Euclid Ave. Sarasota, FL 34237 or to Tidewell Hospice, 5955 Rand Blvd. Sarasota, FL 34238. A virtual memorial service will be held on Friday, November 20, at 10:00 am, First Congregational United Church of Christ in Sarasota, FL. The service is to be live-streamed on the church’s Facebook account: http://www.facebook.com/uccsarasota/ Following the service a zoom room meeting will be held for anyone interested in participating and sharing with a story about John. Details will be provided in the comment section on Facebook. Interment to be at the National Cemetery in Sarasota, FL on Monday November 23, 2020 at 2:00 PM.

John Hathaway Butler Jr, 85, of Sarasota, Florida passed away peacefully at his home on Tuesday, November 10, 2020 after eight months of in-home Hospice care. He was born May 9, 1935 in Dayton, OH to Dr. John H. Butler and Dorothy (Resh). He... View Obituary & Service Information

The family of John Hathaway “Jack” Butler Jr., created this Life Tributes page to make it easy to share your memories.